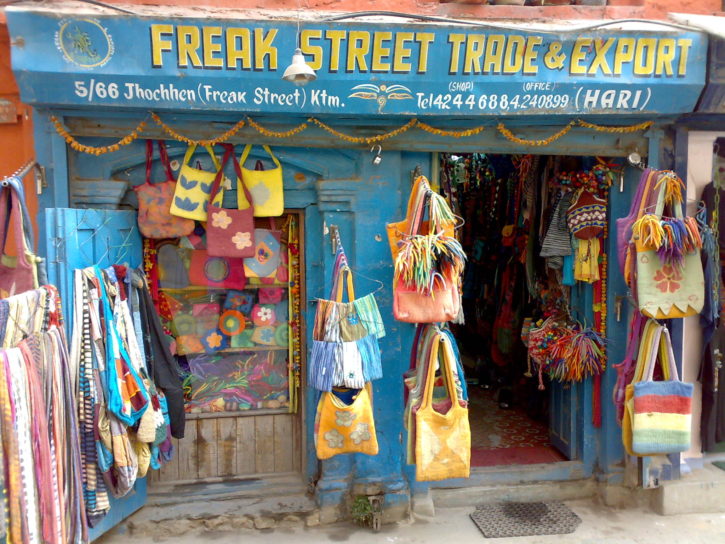 For the current generation of travelers, Freak Street is a glimpse of what Kathmandu was like in the 1960s and 70s. The truth is, this hippie hangout inspired songwriters and travel writers who immortalized it – in more ways than one.

Located off Durbar Square, Freak Street adapted to its extraordinary identity with ease decades ago and proudly carries the name today. Originally Jhhonchen Tole, this street bustles with tourists reliving the memories of the famous hippie-trail of the 1960s. Once, the epicenter of the mystic east and a place to find enlightenment, today’s Freak Street is however beginning to show signs of transformation. The hippies stopped coming, but the attraction continues to grow.

Whatever happened to Freak Street?

Freak Street is reviving, but to truly appreciate its place in Nepal’s history, an introduction to its only surviving pie and chai shop is a must – the Snowman Café, which could as well be what Freak Street is all about.  It holds the key to cultural changes that began in 1960s with the arrival of the hippies who added an international vibe in this mountain-country.

A ten minutes end-to-end walk of Freak Street on its smooth stone slabs (no modern black-topped road here) will unfold its rather checkered past – like the stores selling coloured water-pipes (hookah and shisha are illegal in Nepal) – perhaps the only reference to why and how Jhhonchen Tole came to be called Freak Street. A Tibetan mask center, one of the last remaining face-masks shops in the city, a second-hand bookstore pushing its limits to stay alive in the vanishing book-store culture, nameless carpet, pashmina and local clothes store add to the charm of this street.

Suraj Maharjan, a local tour operator had fond memories of Freak Street. “It is a legend,” he says, “We are glad it is regaining its allure. It is an integral part of our city and history.”

Bookstores filled with trekking maps and guidebooks are the newest arrivals to the scene in an increasingly vital period of Nepal’s transition to a trekking and adventure haven. Today new coffee and sandwich shops entertains trendy locals and tourists on mobiles instead of hippies living in a state of exuberance.

To avoid confusion resulting from the official signpost that refers to this street as Jhhonchen, just look at the shop signs! The name “Freak Street” was given by locals due to the number of “strange” hippies that congregated along the streets’ popular cafes. Today, Rock and Roll might not be heard on the streets or blaring from heavy duty tape-recorders, but the street is alive with the sound of happy travelers reliving a moment of yore.

David Ways, a travel veteran who has written a number of books on Nepal sums it up nicely. “Walk back in time to the 70s by visiting Freak street (while munching on a slice of apple pie). It is a beautiful blend of Nepal’s present and past.”

3 must read books on Hippie Trail

Steadily serving up delicious apple pies and chai since the 1960s, The Snowman Cafe is an important landmark, a window into the past. Stepping inside is like going back in time. A dimly- lit joint with just a handful of tables, it has the kind of cool vibe that never goes out of fashion. This café continues to attract both locals and foreign visitors – some who come to soak up the atmosphere of the 60s, admire the psychedelic paintings, sip a cup of chai and find nirvana in a slice of their famous apple pie.

Interestingly, the hazy atmosphere today is due to various other reasons – and less intoxicating – but that aside, not a lot has changed, and it does feel (in every bite of the pie), that the 1960s has never ended.

Eden Hotel, another legendary hangout at the end of the street (renovated in 2017) has an interesting history. It functioned as a hotel and was the first in Kathmandu to have an elevator installed. Eden Hashish Centre (as it was known) published a Hippie Calendar every year with pictures of jovial or a wrathful Lord Ganesha, considered to be a priceless souvenir.

Among the host of multinational and renowned travelers who arrived here in search of the mystic and free life and made Freak Street their home, albeit temporarily, were the Beatles and Cat Stevens. The latter even wrote the song Katmandu as a tribute to this eclectic city.

The colourful history of Freak Street

In the ‘60s and ‘70s, and sometime into the ‘80s, it was one of the most famous streets in the world – almost as well-known as Champs Elysees, Paris when chai and pie’ shops, restaurants, bookshops, tape-shops, second-hand stores, curio and souvenir shops lined the streets and the aroma of hashish and marijuana wafting from every corner. The street was bursting with flower children from all over the world. It was the hippie hangout, a placed that embraced the flower children.

Besides many famous cultural figures like Cat Stevens and Beatles, one of the many guesthouses here hosted a particularly infamous guest- the devil-incarnate himself, Charles ‘the Cobra’ Sobhraj.

The Mural of Freak Street

The story behind the giant mural of Freak Street has its roots in the recent past. The man who portrays the Lakhey, Laxman Ranjit, was with his wife Nilu giving blood when the disastrous earthquake of 2015 struck. Lakhey rushed out to save his son but unfortunately his wife died. UK based mural artist Martin Travers, created this mural as a memorial of sorts to the Lakhey and his wife who can be seen depicted in the mural under the moon.

Another mural of a young Newari girl can be seen right across the Snowman Café, brightening up the otherwise dreary space.

Singer Cat Stevens spent considerable time in a guesthouse on Freak Street and got the inspiration for his song Katmandu.

What not to miss in Freak Street