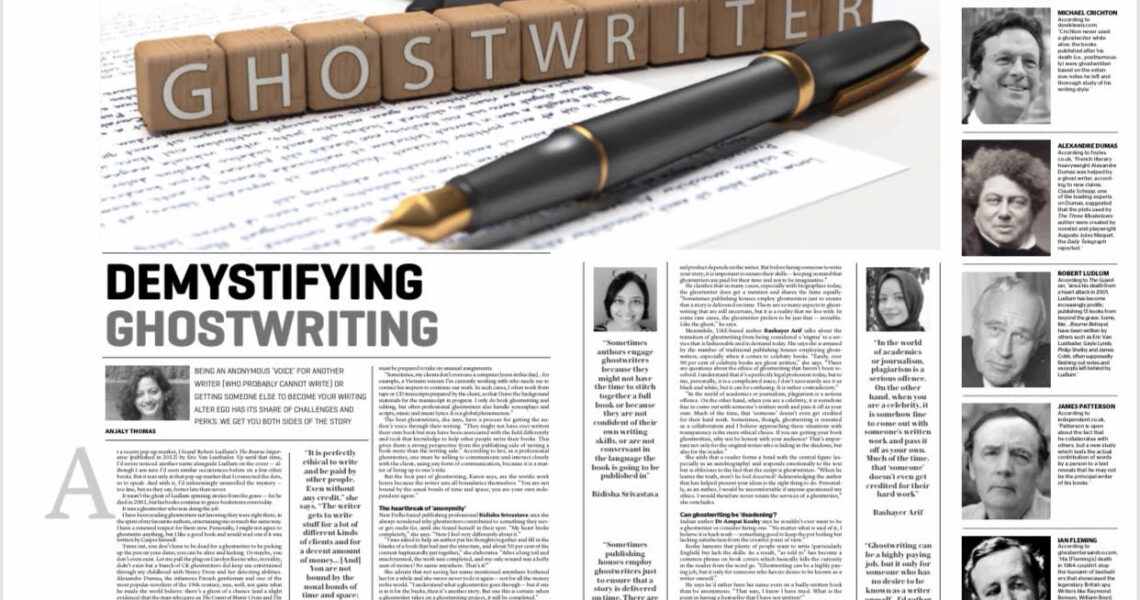 At a recent pop-up market, I found Robert Ludlum’s The Bourne Imperative (published in 2012) by Eric Van Lustbader. Up until that time, I’d never noticed another name alongside Ludlum on the cover — although I am sure I’d seen similar occurrences before on a few other books. But it was only at that pop-up market that I connected the dots, so to speak. And with it, I’d unknowingly unravelled the mystery — too late, but as they say, better late than never.

It wasn’t the ghost of Ludlum spinning stories from the grave — for he died in 2001, but his books continue to grace bookstores even today.

It was a ghostwriter who was doing the job.

I have been reading ghostwriters not knowing they were right there, in the spirit of my favourite authors, entertaining me in much the same way. I have a renewed respect for them now. Personally, I might not agree to ghostwrite anything, but I like a good book and would read one if it was written by Casper himself.

Turns out, you don’t have to be dead for a ghostwriter to be picking up the pen on your dime; you can be alive and kicking. Or maybe, you don’t even exist. Let me pull the plug on Carolyn Keene who, in reality, didn’t exist but a bunch of CK ghostwriters did keep me entertained through my childhood with Nancy Drew and her detecting abilities. Alexandre Dumas, the infamous French gentleman and one of the most popular novelists of the 19th century, was, well, not quite what he made the world believe: there’s a ghost of a chance (and a slight evidence) that the man who gave us The Count of Monte Cristo and The Three Musketeers didn’t do it alone. He was aided by Auguste Maquet, a man who remained uncredited and died in obscurity. But on Maquet’s tombstone in a cemetery in Paris are etched these words — The Three Musketeers, The Count of Monte Cristo, and La Reine Margot.

Then, there are a few of my other favourites, like James Patterson and Tom Clancy, who had clearly employed ghostwriters to churn out ‘five books a year’. I won’t even go into biographies just yet.

It appears to me that many ghostwriters may never have ever written their own book, but their knowledge on a subject helped others write theirs. But, these days, despite ghostwriting’s increasing popularity, people’s opinion remain divided on their role today.

Ghostwriting is a centuries-old profession

US-based Karen Cole, a prolific ghostwriter who also runs a ghostwriting service, maintains a very positive outlook on the trend. According to her, ghostwriting is a centuries-old tradition — it is neither new nor illegal. “It is perfectly ethical to write and be paid by other people. Even without any credit,” she says. “The writer gets to write stuff for a lot of different kinds of clients and for a decent amount of money.”

The heartbreak of ‘anonymity’

New Delhi-based publishing professional Bidisha Srivastava says she always wondered why ghostwriters contributed to something they never got credit for, until she found herself in their spot. “My heart broke completely,” she says. “Now I feel very differently about it.”